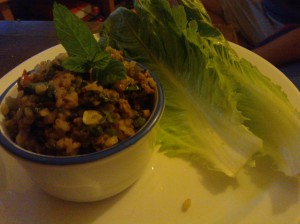 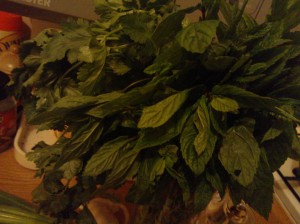 It’s extremely moreish, with the salty, spicy ground meat, fresh herbs and zingy lime – all wrapped up in crunchy lettuce.

I first tried Larb in Vientiane, Laos, where it is regarded as their national dish. Larb can be made with any minced meat, and sometimes mushrooms, and is traditionally served with chilli, fish sauce, padaek (pickled fish sauce from Laos), lime juice and fresh herbs.

In some places they eat Larb salad raw but you would most commonly find it cooked due to the high risk of food poisoning. It is also traditionally served at room temperature with sticky rice and raw vegetables. I prefer to eat mine wrapped in crunchy lettuce 🙂

In my recipe I am using lamb mince, and have added some toasted cumin seeds to complement the lamb. You can use any meat you like with this recipe such as pork, beef, chicken or fish and omit the cumin seeds to suit your meat of choice. My other favourite is to use pork mince with toasted fennel seeds. Mmmmmmm.

handful each of mint and coriander

1/2 chilli, chopped (add a whole chilli if you want it super spicy)

1. Toast the rice in a dry pan until the rice begins to brown and pop.

2. Put into a small saucepan with a pinch of salt, and cover with the same amount of water.

3. Bring to a boil, then lower heat and simmer until the water has dissolved, stirring occasionally.  You want the rice to still have some bite to it so don’t worry if it doesn’t feel completely cooked through. 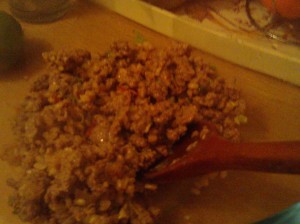 5. In a frying pan, heat 1 tbsp coconut oil, then add the mince mixture. Cook on a medium heat, making sure to break the mince up to cook evenly.

6. When the mince is cooked, add the rice and cook until all the liquid is absorbed.

7. Remove from the pan and place the mixture in a bowl. Add 1 tsp fish sauce, the lime juice, coriander, mint and the green part of the spring onion. Mix to combine. 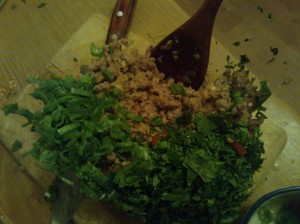 8. Taste and check for seasonings.

9. Serve in crispy lettuce leaves and eat with your hands!!

View all posts by wherethelocalthingsare

One thought on “Larb Salad”